Aeration processes for treating wastewater use oxygen to aid in a natural biological process. There are a variety of aeration processes available to companies and municipalities that need to treat wastewater, either for disposal or reuse. This article will take an in-depth look at five standard methods of aeration: activated sludge process (ASP), sequencing batch reactor (SBR), sequencing batch bioreactor (SBBR), membrane bioreactor (MBR) and moving bed biofilm reactor (MBBR). Making direct comparisons will help explain how each of these methods works.

Each of these processes offers advantages and disadvantages, which we’ll analyze. MBBR capitalizes on the strengths of aeration processes and offers unique benefits that set it apart from other aeration processes. MBBR allows people to effectively treat wastewater for organic contaminants, accomplish nitrification and denitrification and do it all with an impressive level of efficiency.

What Is ASP Aeration?

The most common aeration process used to treat wastewater is the activated sludge process (ASP). Researchers developed the concept of ASP just over a century ago, and many people still consider the modern iteration of this process to be the standard means of biological wastewater treatment. This process uses aeration and floc to separate sludge from water.

How Does ASP Work?

With ASP, influent enters an aeration tank, injecting it with oxygen. This extra oxygen allows microorganisms to multiply and grow so they can decompose the organic waste in the water. The water then moves on to a settling tank, also known as a clarifier. At this point, the microorganisms settle to the bottom of the tank. These microorganisms are also called biological flocs or a sludge blanket. As the sludge settles, the remaining water is cleaner.

This clear liquid flows out of the settling tank, and part of the sludge at the bottom gets recycled back into the aeration tank, where it can work to decompose organic waste in a new batch of wastewater. As this process continues, the amount of microorganisms in the tank increase, allowing for more efficient treatment, as long as plenty of oxygen is available to feed the microorganisms.

ASK AN EXPERTREQUEST A QUOTE

Pros and Cons of ASP

Activated sludge has long been a popular method because it offers some advantages. ASP is:

While ASP may be the original form of biological wastewater treatment, it is not the most effective or efficient. ASP:

What Is SBR Aeration?

A sequencing batch reactor (SBR) aeration system is similar to an activated sludge process. The fundamental difference is that this system uses one tank for all the treatment steps, rather than using different equipment for each step in the process. As the term “sequencing” suggests, SBR uses time, rather than space, to accomplish its wastewater treatment purposes. This type of system originated as far back as 1914, according to the Environmental Protection Agency (EPA). Sequencing batch reactors are still in common use today.

How Does SBR Work?

The SBR system design uses a carefully timed sequence to accomplish sub-processes such as equalization, aeration and sedimentation all in the same tank. It does so through a set cycle that typically consists of five steps. First in the SBR process, an operator will fill the tank with influent. Next, aeration and microorganisms begin to facilitate a biological reaction. After this step concludes, clarification takes place, meaning the sludge begins to settle. Typically, this process would take place in a different tank, but with SBR, it happens in the same tank that served as a reactor for the biological process.

After the clarification process has finished, the operator removes the treated effluent from the tank and pumps out the wasted sludge. This last step in the process is known as idle. After reaching this point, the SBR system can start over, introducing a new batch of influent into the tank and moving once more through the sequence of subprocesses that turn contaminated wastewater into treated effluent.

As with many other types of aeration processes, SBR is often part of a broader framework for wastewater treatment. Other stages, such as grit removal, may come before, and some, such as disinfection, can follow. In some cases, SBR alone may work as the sole means of treating wastewater, depending on the quality of the influent and the desired quality of effluent.

Pros and Cons of SBR 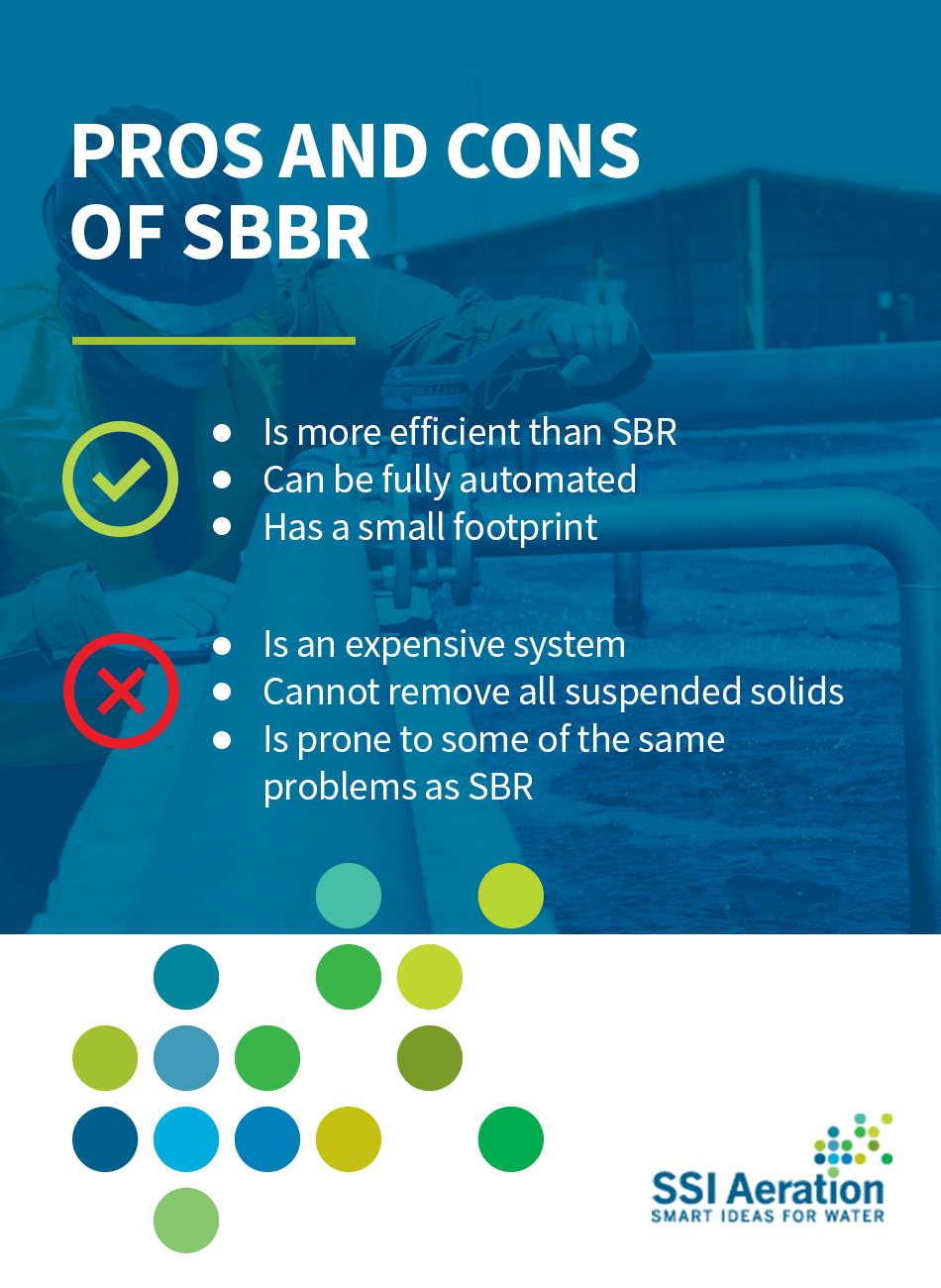 The advantages of using SBR include that it:

The disadvantages of this process include that it:

Sequencing batch bioreactor (SBBR) is a more recent development designed to improve on the traditional SBR process. Specifically, the goal of SBBR is to speed up the aeration stage to treat wastewater with a lower hydraulic retention time (HRT). To do this, the SBBR process combines SBR with a biofilm reactor. The SBBR process has attracted attention in recent years because of its advantages over the standard SBR process.

The SBBR process looks very much like SBR, since it is a variation thereof. The main difference is that SBBR includes a suspended growth component. So, rather than using aeration alone to facilitate a biological reaction, support materials, such as plastic media, get mixed into the tank. The best type of support material to use depends on the types of biological contaminants in the wastewater and the goals for treatment. Biofilm will grow on the support material, and the microorganisms will decompose the waste in the water.

Converting existing SBR systems into SBBR systems involves adding the carriers needed for a suspended growth biological reaction. Since SBBR is a newer process compared to traditional SBR systems, new equipment designed for SBBR can automate the process as much as possible with intelligent dynamic control systems. These systems improve upon traditional time control systems associated with SBR.

One study analyzed the abilities of an SBBR with an intelligent controlling system and found that, compared to SBR, it was able to reduce HRT and improve performance in removing chemical oxygen demand. One reason SBBR is more efficient than SBR is that it can simultaneously remove phosphorous and nitrogen.

Pros and Cons of SBBR

We’ve already seen some of the advantages of SBBR over SBR. Overall, this process does offer some significant benefits. SBBR:

The disadvantages of SBBR are that it:

What Is MBR Aeration?

Membrane bioreactor (MBR) is a wastewater treatment system that combines a membrane process with a suspended growth biological treatment method. Typically, the membrane is either low-pressure microfiltration or ultrafiltration, and the suspended growth step is an activated sludge process. This combination system saw its first commercial use in the late 1960s, for treating wastewater on ships. Since its early days, MBR technology has become a popular option for wastewater treatment of all kinds.

How Does MBR Work?

The first portion of MBR tends to look exactly like a standard activated sludge process. However, rather than moving on to a settling tank after going through the activated sludge process, the water passes through a membrane that efficiently removes solids. The size of solids that need removal from the water will dictate which type of semipermeable membrane to use. Membranes with tiny pores around 0.1 μm in diameter are ultrafiltration membranes. Membranes with pores up to 10 μm are microfiltration membranes.

Each MBR system will look a bit different depending on the filtration needs of a particular municipality or company. Some MBR systems will include many separate sub-systems that work to remove all the contaminants.

Pros and Cons of MBR

Membrane bioreactors offer a few advantages, including that they:

MBR systems also have some disadvantages, such as the fact that they:

Finally, there is one more innovative method of aeration to examine: moving bed biofilm reactor (MBBR). This process, developed in the late 1980s and early ’90s, uses biofilm attached to thousands of small plastic media to decompose waste present in influent in an aeration tank. MBBR requires some monitoring, but it is largely self-moderating, since the microorganisms in the tank can naturally respond to fluctuations in the type and amount of waste in the water.

In an MBBR process, influent enters an aeration tank, also called a reactor, full of thousands of little plastic pieces called carriers or media. These media maximize the surface area they provide for microorganisms to grow, and they are a similar density to water, so they mix well throughout the tank.

An aeration grid also helps the media mix in the tank and provides a continuous supply of oxygen. As with other aeration processes, the additional oxygen in the tank feeds the microorganisms so they can efficiently work on the organic matter in the water. A mesh sieve keeps the media inside the tank so they don’t escape.

Since the biofilm on the media decomposes the waste in the tank, the water that flows out gets treated effectively. In addition to removing organic waste, MBBR can also play a role in the nitrification and denitrification processes. Unlike processes such as ASP, there is no need for a settling tank, and the treated effluent tends to be cleaner.

Pros and Cons of MBBR

MBBR has some unique strengths that make it an improvement on many other aeration techniques for treating wastewater. Some of the advantages of MBBR are that it:

Get a Free MBBR Quote From SSI Aeration

Aeration processes of wastewater treatment take advantage of natural processes to effectively create cleaner effluent. However, not all aeration processes are the same. Each process comes with distinct advantages and drawbacks. Anyone who needs to choose the best method of treatment for their facility can consider moving bed biofilm reactor technology.

MBBR delivers more benefits than other systems and has minimal disadvantages. To learn more about MBBR, take some time to look at the EEVolved MBBR from SSI Aeration, Inc. As industry leaders, SSI offers the very best in MBBR technology. SSI’s system can effectively and efficiently treat wastewater for safe and responsible disposal or recycling for use in industrial processes or a sewage system.

No two companies are alike when it comes to wastewater treatment, which is why SSI customizes every EEVolved MBBR according to clients’ unique needs. Request a quote from SSI to see whether EEVolved MBBR might be a good fit. Contact SSI with any remaining questions. SSI’s knowledgeable representatives help potential customers understand how to choose the right system for their application, and how to take advantage of the best aeration technology has to offer.