At the Northeast Water Reclamation Facility in St. Petersburg Florida the operating staff were recently faced with the challenged with the task of upgrading inefficient mechanical aerators.

After much research the team decided to install a new system including SSI fine bubble diffusers including SSI’s PTFE membranes. By switching to fine bubble disc diffusers the city is expected to save 588,000 kWh/year which comes to about $52,000 in just the first year of operation.

In addition to selecting PTFE membranes the city has also installed a state of the art Telemetry system allowing for remote monitoring of the system from any device and location with internet access.

Installation of the system and commissioning took place in March 2016 and thus far the system has been operating flawlessly and the city could not be happier. 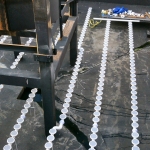